By Stephen A. DiTullio

With an understanding of when and how to use confidentiality agreements, you can prevent information on your business operations from landing in the hands of your competitors.

Confidentiality agreements can provide you several key protections. They can protect important technical and/or commercial information from disclosure to others. For example, in the employment setting, an employee agrees not to disclose certain technical or commercial information that he has access to or receives during his employment with the employer. If the employee were to violate the agreement, the employer would have a claim for breach of contract and potential injunctive and monetary damages.

A contractor can also protect trade secrets, if any, in its business.  Contractors are able to protect indefinitely their trade secrets under the Uniform Trade Secrets Act ("UTSA"), which exists in over 40 states throughout the country.

A trade secret is defined as information, including a formula, pattern, compilation, program, device, method, technique or process to which the following apply:

Some courts also use the following six factors for guidance in determining whether specific information is a protectable trade secret:

Under the UTSA, a company may prevent a former employee from misappropriating the company's trade secrets for an indefinite period of time, provided that the company brings a claim within three years after the misappropriation is discovered or should have been discovered.

Both a confidentiality agreement and a trade secrets nondisclosure agreement must include consideration for the employees' promises. For new employees, the employment opportunity itself can be sufficient consideration. It should be specifically set forth in the agreement. In contrast, if the confidentiality agreement is being executed by a current employee, additional consideration is necessary. For example, contractors may need to offer a small sum of compensation (e.g. $50-100) or an additional employment benefit (e.g. half day of additional paid time off) in addition to the continuing employment.  Again, this must be specifically set forth in the agreement.

With an understanding of when and how to use confidentiality agreements, you can prevent information on your business operations from landing in the hands of your competitors. 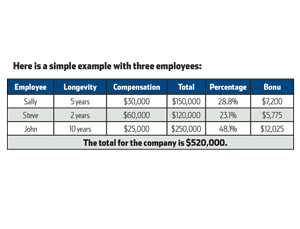 Enact a profit sharing program, rather than a bonus entitlement.

How to Protect Your Business Secrets

Your trade secrets may consist of customer lists, training manuals, financial records, contracts with distributors, and the like, that would be very valuable to your competition. Keep them secret with some of these simple, inexpensive steps.

Most contractors don’t think about how much time is stolen by employees doing personal activities on company time.

Breathe Life Into Your Strategic Plan

A strategic plan should be a living document — with a solid foundation in the form of a clear vision for the future and short list of the core values that drive decision-making in the company.