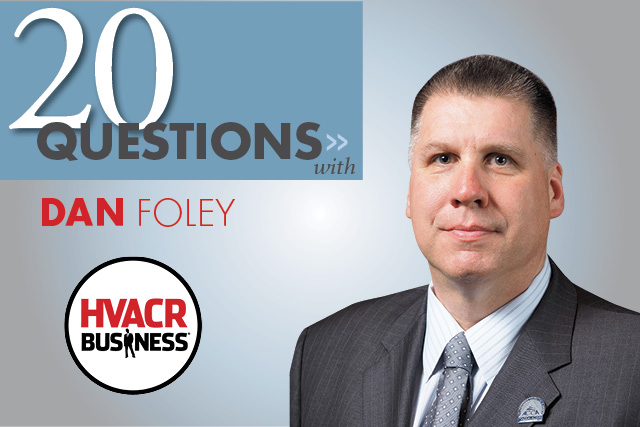 We sat down with Dan Foley, owner and president of Foley Mechanical in Lorton, Va. Foley discussed his unlikely path into the industry, learning from skilled craftsmen and overcoming his recent battle with COVID-19 and the effects it had on him and his business.

Between my junior and senior year at Virginia Tech, I worked as a parts runner and helper at a company called Arlington Heating and Air. I ended up staying there for 15 years.

2. Did you always know this is what you were going to do?

When I graduated from Virginia Tech in 1988, I wasn’t sure what I was going to do. My father was in the military and I thought I was going to go into the military, but I broke my ankle before I was supposed to go for Officer Candidate School so I got pushed back a year. I didn’t want to wait, so I stayed at Arlington Heating and Air.

3. What did you learn there?

I had the stereotypical idea of what you call a trade — the dumb kids that couldn’t get a job so they went to auto shop, they went to wood shop in high school and went to the trades. That first summer, I worked with a technician by the name of Doug Ashwood, who’s still there at Arlington Heating. I could see he was a skilled craftsman who was smart. Even though I had a college degree and he didn’t, he was smarter than me.

You can’t be in this trade and be good and be stupid. You can’t smoke dope or drink or what have you. The job … you’ve got to have a clean and clear head. The stuff he figured out that first year when I was working, I realized you couldn’t be stupid in this business.

5. What else did he teach you?

I learned so much from him. I realized you’ve got to know what you’re doing. I started, again, as a helper, parts runner, then advanced helper. Then I thought I could do the job, even though I probably couldn’t. They put me into a truck and I started running my own jobs. Not complicated stuff, just change outs and stuff. And then from there I evolved into a service tech.

6. When did you start your own company?

I started out in 2002 out of the garage of my townhouse, one employee and me.

7. What was your focus then?

I thought I wanted to do design work. I loved doing design and I use AutoCAD; I use a lot of the calculation software. I thought I was going to do design work for architects, builders and maybe even other contractors. After about two months of that with zero income, I said I need to rethink this.

I still had some contacts with some builders that I’d done work for through friends and family and Salesforce. So, then I went back into the contracting business in April of 2002. I figured out what I wanted to do for the next four or five months and then started Foley Mechanical.

9. How long before you started to grow?

We had five or six employees within six months and moved out of the garage and had a shop. I’ve had a high-water mark of 28, 29 employees. That was too big for us. We’re at about 16 employees right now.

My focus has been hydronics. And by dollar volume, probably 30, maybe 40 percent of my business is the large custom homes. Luckily, I’m in an area of Washington D.C. that’s affluent. It has the clients that can afford that type of job. Service replacement is still a good part of what I do. Then there’s some remodeling work, additions, that sort for just a regular suburban type house and not the big custom homes.

11. How has the pandemic affected business?

We were going pretty strong, and then the brakes hit in March as clients just didn’t want us in the houses. No one did. It was uncertainty. Then the first week of April, I started feeling funny and I just couldn’t get out of bed. I went and got tested and I was positive (for COVID-19).

12. What was your experience?

It knocked me out. I mean, everyone’s affected differently. My experience was it knocked me out. I was in the hospital for seven days in early April. And even when I was released, I couldn’t get out of bed for probably two more weeks. I just had zero energy, beyond zero energy. I felt like I boxed Mike Tyson for 12 hours and then got run over by the metro bus. I could not physically move. And then even as I gradually got my strength back, I lost 30 pounds in three weeks.

It hit me; it threw me for a loop. So even when I was starting to feel better, I had no strength, I hadn’t eaten in a month. So, it took me awhile to get out of it. And then even into May, I was in a fog where I just couldn’t concentrate. I could work for maybe two or three hours at a time and then I had to either lay down or go home.

14. How did the business fair?

I was really concerned, because I’m the linchpin. I’ve got talented technicians but I’m the one that brings the work in. What I found out was that was not a good place to be in because none of my guys were trained to close jobs or sell jobs or bring in work. So, we had no income basically.

When I say no, I mean, it wasn’t flat on zero but it may have well been. It didn’t cover our expenses for two months. The expenses didn’t change but I had no revenue. When I was in the hospital, my technicians, my employees didn’t know what to do.

I told everybody to stay at home for two weeks until we figure out who’s sick, who’s not sick, what’s going on. They didn’t know if they had it. I had worked up until the point where I got sick. I tried to power through it but I was working. So, they didn’t know whether they had it or not. They had families, kids. The right call was made, everybody stayed home. I had one technician that handled emergency calls, dispatch, direct business home. And then I did that with emergency calls, but that doesn’t pay the bills.

By June 1, financially it didn’t look good. But then the weather changed. It got hot. And so, when you don’t want technicians in your house because of COVID fears, and it’s 95 degrees and you don’t have air conditioning, guess what … you get creative. Customers would say, “Hey, we’ll leave and leave the back door unlocked, take care of it,” or “We’ll go upstairs, call us to turn the thermostat on. We’ll turn it up or down.” You can find ways to keep your distance, keep everybody safe and still do the work.

June was a record-breaking month because no one let us do the work in April or May. So, when June hit and it got hot, we had two months’ worth of backlog work that we didn’t do because the clients didn’t want it done that hit. One month made up for the previous two months.

July was even better. August was a record-breaking month. And then what happened was, it was colder in September. But the good news is, everyone started thinking about heat. So now we’re doing boiler work in September instead of waiting till October or November. So, we’ve done more boiler change outs over the last six weeks than I’ve done since I started my company in a six-week span because we started early.

20. Did anyone else contract the virus?

No. A couple other guys have gotten sick. We told them to stay home until they got tested but it was just the flu. It wasn’t COVID-19. I couldn’t believe no one else here got it. As bad as it was for me, we were lucky.