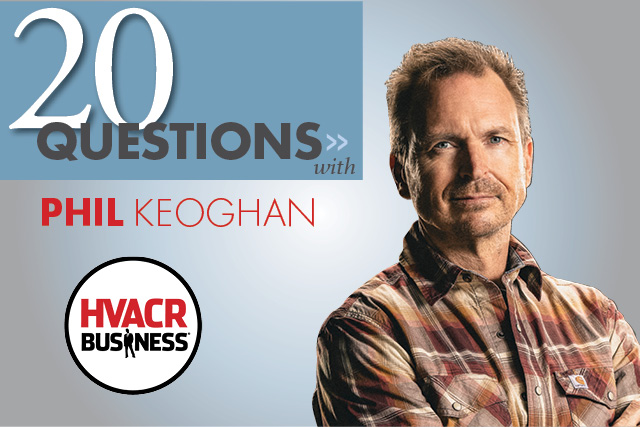 Pete Grasso sat down with Phil Keoghan, host of ‘The Amazing Race’ and host, creator and producer of ‘Tough as Nails,’ a reality competition show on CBS that celebrates hardworking Americans who keep the country running. Phil discussed his appreciation for the skilled labor workforce, his family’s blue-collar roots and why it’s important to highlight a career in the trades.

My dad got a job at Guelph University as a lecturer in agronomy, his specialty is plant science. We were living in New Zealand at the time. My mom was a music teacher, and they decided to go to Canada when I was 3 with my sister and I.

2. How did they make the most of the traveling?

We traveled a lot of road trips in a Volkswagen camper van. I remember one summer, we went to all the major national parks in North America over a period of nine weeks.

My parents gave me the travel bug, so I didn’t really have a choice in the beginning. Part of our life was definitely a lot of traveling, a lot of meeting different people, and going to new places. We moved down to the Caribbean when I was around 6 and we lived on the Island of Antigua for eight years. During that time, we traveled a lot into South America. I used to travel up to music school from Antigua to New York.

4. When did you move back to New Zealand?

When I was starting high school, I flew back and went to boarding school. And then straight out of school, I’d started traveling again. I just had this overwhelming desire to keep on traveling and I love traveling and it hasn’t stopped.

My parents got me into photography at a very early age. I had a camera, always loved taking photographs, and I had this desire to do cinematography, to film stories and maybe shoot movies or documentaries. I wasn’t really sure.

6. When did you figure it out?

I remember in high school, everybody had it figured out what they were going to do. They were all going to become lawyers or doctors, or some of my friends went back to the family farm. I was very keen on working in television. I was going to go to university just because that was sort of what you did. And it’s like, “Well, go to university.” And I’m like, “Okay.” And then this job came up. This job opportunity, there were very few apprentice positions available and I managed to get one of them. And it was best thing that happened to me.

In those days, they didn’t have broadcasting schools or a tertiary education for broadcasting. You learned by doing the job. Back in those days in New Zealand and in the mid 1980s, you went and you learned on the job. I learned from a lot of really experienced people and I came up through the ranks. It just so happened that in the middle of my apprenticeship, that I was asked to jump in front of the camera.

8. Do you still love cameras?

I still use those same skills I learned. I haven’t stopped learning cameras. Even this weekend I was shooting some stuff with ‘Tough as Nails.’ I’ve continued to keep my skills up in the camera department and camera technology.

9. What’s your history with the trades?

My grandfather on my father’s side was a mechanic and aeromechanic and a gunsmith. My grandfather on my mother’s side, he was a carpenter. Their parents were either coal miners or gold miners. I come from families that are builders and my family is definitely all about working with their hands. In my school holidays, I spent a lot of time with my grandfather, helping him do all kinds of odd jobs. If ever there was a repair job to be done, you didn’t call the repair person. You did it yourself.

He showed me how he would redo all the handles on his tools so that they would all fit ergonomically into his hand. I have some of those tools. He’d rip off the manufactured handles, plastic handles on whatever tool he had, and redesign the handle to fit his hand. And it was because he was working with tools all the time. He wanted them to fit properly.

The inspiration really came from me being frustrated with hearing people say derogatory comments about people in the trades as if somebody in the trades was less than somebody else. I felt, “Hold on, you’re talking about my grandfather right now.”

12. So, ‘Tough as Nails’ celebrates people like your grandfather?

It always irked me that just because someone didn’t necessarily go get an education, that somehow that was an indication of how bright they were or how much they contributed to society. My grandfather was one of the most well-read, smartest people I’ve ever met. The idea of the show is to honor those people who literally keep the country running.

13. How should we measure education?

14. How is this show different?

‘Tough as Nails’ is really an acknowledgement of the hard working people who keep the country going. They love their jobs. They’re passionate about their jobs. They’re not looking to be famous … a lot of reality shows focus on people getting into the limelight. Our contestants are going back to work on Monday.

‘The Amazing Race’ is a very different gig. I do go everywhere, but my interaction with the contestants tends to be (limited). I do enjoy being right there in the heat of the action (on ‘Tough as Nails’) calling what’s going on, calling the play and encouraging them and celebrating them. It’s a different game for sure.

16. Is it difficult to find contestants?

17. Is the show helping recruit more people into the trades?

I would like to think so. I do know that we have seen videos posted of young boys and girls who are pretending to be ‘Tough as Nails’ contestants. They got the shovel out in the middle of a storm and they’re loading up a toy wheelbarrow and replicating what they’ve seen.

18. What support have you gotten?

I had a little back and forth with Mike Rowe not so long ago because, you know, he’s been such an advocate for getting people into the trades and I wanted to acknowledge him and to let him know about the show.

A lot of that has to do with the attitude of parents too. A lot of people don’t know that in the trades, you can make a really good living. They just assume that people who are in the trades are somehow not able to make a good living and not able to find their passion. That’s not true.