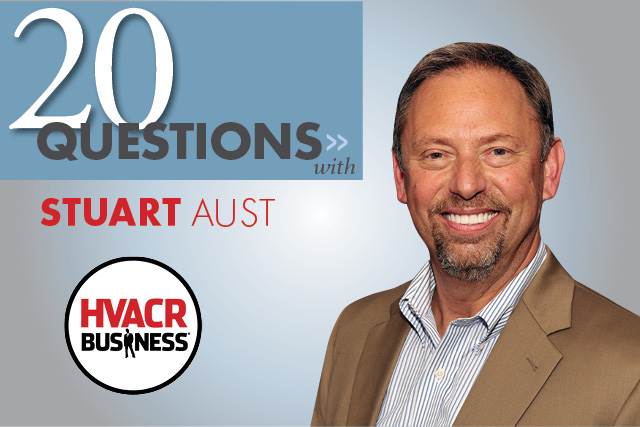 We sat down with Stuart Aust, principal/founder of The Aust Group, a mergers and acquisitions advisory firm for service companies. Aust discussed growing and selling his own service business, the importance of succession planning and working with his sons.

I got started in the service industry more than 30 years ago. I worked for two different pest control companies, first as a service manager, then as an account executive in sales, before starting my own company.

2. Why did you start your own company?

The dream was always, as a younger man, to have my own company. So, I could, God willing, control my own destiny. Having had both sides of the service and sales, I felt very confident going into my own business.

3. Did that confidence last?

As I look back, it was really jumping out of my comfort zone. I always had a commission check coming the next month, from the previous month’s sales. So, I’d be lying if I didn’t say it made me a little nervous. But the American dream for some, is to really start your own company and grow it over the years.

We almost took on anybody for a customer just to have customers. It wasn’t until years later that we started to look at things like a profit and loss statement, balance sheet, et cetera. In the beginning, it was just mixing and matching to have customers and revenue coming in. And it was exciting as much as it was scary.

5. How long before you started to grow?

6. So, then business really started booming?

Yes, I knew I was on the right track and that the sky was the limit. After Yankee Stadium, we started landing accounts like the United Nations on the East Side of Manhattan, Madison Square Garden, the world-famous Plaza Hotel … and literally, hundreds of Walmart’s, Sam’s Clubs, Macy’s.

7. And it all came from cold-calling?

Yes, most of those were from cold calls. I always encourage business owners to really think outside the box and think big. Someone has to service these accounts; it might as well be you.

I’ve read a lot of books on leadership. I’ve also made a study of people that were over me in leadership when I was working for the different companies. I always said to myself and to my wife Donna, that someday when I become an owner of a company, I want to treat people the way I would want to be treated. Like the Bible says, “You reap what you sow.”

9. What did you learn about leading?

Leadership is not telling people what to do when you want something done. It’s a skill each one of us needs to develop. A lot of times, it’s getting people to buy in … asking your employees to be part of something or think about something and help you make decisions.

10. How do you motivate people?

People are more motivated when they believe in something, rather than when their told to do something and they don’t understand.

When we started the company in 1992, it was just myself and my wife Donna. We grew to about 40 employees with more than $7 million annual revenue by 2016.

12. That’s when you sold the business?

Yes. We were approached by Anticimex from Sweden, owned by a private equity. They made us an offer we couldn’t refuse.

I’d talked about it a lot over the years with my wife and the multiples for selling had taken a dramatic upswing. I’d talk to colleagues at industry events, and I was starting to get the pulse. Some of my friends and colleagues were selling their companies. And they would share with me, and I would inquire.

Everything in life is about timing. You should look at your business as an asset — and I understand some folks want to pass it on to the next generation. That’s their legacy, and that’s what they choose. I spoke to my wife and our sons and when they heard what the offer was, everyone was in agreement that, “Hey Dad, you’ve got to do this.”

Immediately after I sold, I started getting a lot of phone calls, emails, text messages from people in the industry. My new role at Anticimex was vice president of business development, concentrating on mergers and acquisitions. I did that for two years and then realized there was an opportunity to go into business for myself again.

16. You started another company?

Once an entrepreneur, always an entrepreneur. The phones haven’t stopped ringing since. The Aust Group is an advisory firm for service companies looking to sell their business.

We’re helping companies find the right fit, and that begins with mentoring and helping companies with their succession plan. Some folks want to buy companies. Some have a succession plan down the road. In one year, three years, five years, that they want to sell their companies. So, I work with them on getting their KPIs and metrics in order. So, this way when they bring it to the market, they’d have a company that is going to be sold at maximum value.

18. What’s the main thing a business owner should do to prepare for a sale?

The biggest thing is to have a good EBITDA (Earnings Before Interest, Taxes, Depreciation, Amortization) … fancy way of saying profitability. What contributes to a good EBITDA is having good pricing. Pricing of your services is key, as well as recurring revenue. Maintenance contracts are key, because acquirers love recurring revenue.

Now is a great time to be selling a company. But it’s also a great time to be buying a company. Interest rates are low. The capital gains are low right now. We don’t know what will happen with that in the future. But it’s a great way for a small company to get bigger. And typically, larger top line companies, companies that have a million dollars in revenue that are run really well, with good profitability, will command more than a similar size company that’s not run well. We see an increase in the multiples being paid for some of the better run companies with solid leadership.

It’s been a real blessing. They were young while we were growing the first business. The years went super fast. Now they’re older and able to work alongside me. Three of my four boys work with me full time — Dan, Nick and Chris. The youngest, Michael, is a senior in college and works for us part time in the summer.