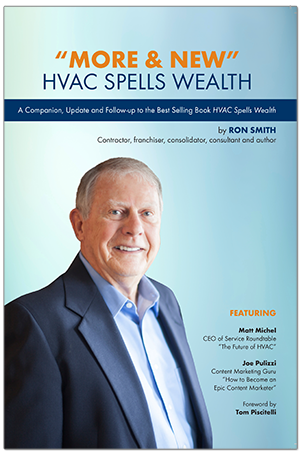 Ron Smith is at it again! The industry legend has just published his third book, "More & New HVAC Spells Wealth." This book is a companion, as well as an update, to his best seller "HVAC Spells Wealth" (Ron's other book is "HVAC Light Commercial Service Agreements").

Ron is a familiar name in our industry — in addition to his success as an author, he's been an accomplished contractor and consultant for many years.

He's also a great personal friend and served on our advisory board for years. Ron helped me launch HVACR Business 10 years ago and wrote a monthly column from 2006 until 2010 (all of which are available here).

Ron and I talked quite a bit when he was writing his first book (I even gave him some advice on the cover art). When he wrote that one, he didn't have a contract with a publisher so he was doing it all on his own. I remember asking him how many he'd planned to print. "I'm going to gamble and print 3,000," he said.

Well, 25,000 copies later, he's still shipping books every week. I have no doubt this new book will be every bit as popular.

I received my autographed copy late last week and I've packed it in my carryon bag to keep me company during my travels the next few weeks. A good book always makes those flights seem much shorter.

To order your copy, visit ronsmithhvac.com.

Another friend and former editorial advisory board member, Theo Etzel, has also recently published a book. For those who don't know Theo, he is the president and CEO of Conditioned Air in Naples, Fla.

When Theo took over Conditioned Air in 1995, the company had $2.7 million in sales. Last year, the organization had grown to $46 million in sales with more than 300 employees. Under Theo's leadership, the company has received numerous awards including the National Contractor of the Year award from the Air Conditioning Contractors of America (ACCA). 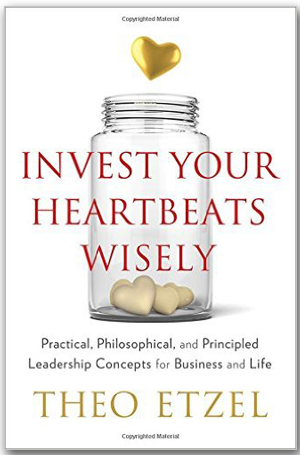 His book, "Invest Your Heartbeats Wisely," focuses on practical, philosophical and principled leadership concepts for business and life.

I played golf with Theo several years ago at his club in Naples and I remember two remarkable things about that day. First, it was 95F with a "comfy" 97 percent humidity — and because the course was extremely wet from the previous day's monsoon, it easily qualified as one of the most challenging rounds of golf I've ever played.

The other thing I'll never forget about that day is the way Theo described the outline for his book. Years before, his mother had come up with the concepts of trading heartbeats.

She told him to trade them wisely, since each person has only so many heartbeats on this earth. Behind every thought and action is a heartbeat, which is traded like currency.

I knew right away it was a great concept and excellent advice.

His book offers guidelines to help you lead in business and live as an ethical person. Theo discusses how to effectively lead an organization, how to create a corporate culture of accountability and the importance of mentoring, along with advice on every aspect of running a company, from getting started and hiring and motivating employees to letting go and redirecting when you are ready to exit the business.

It's available on Amazon, in both hardcover and Kindle formats.

I've had the pleasure of getting to know Ron and Theo over the years, and we've been fortunate to publish many articles from both of these great HVACR businessmen. Both have done so much to advance this industry. I urge you to pick up copies of both of these two new books.