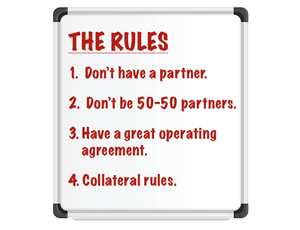 By Terry Tanker
Business partnerships are like marriages; they're great until they're not. And, once the divorce starts, it's not just ugly for the partners, it's ugly for everyone at the firm.

Unfortunately, Rule No. 1 one is broken routinely. Ninety percent of the time it's because, financially, you can't start a business without a partner. Five percent of the time it's because you both possess unique qualities the other does not. The other five percent happens because the partners are naive, young, both or have little business acumen and think starting a business will be fun and easy.

Rule No. 3 — Have a great operating agreement.

Operating agreements are a dime a dozen. Don't let an attorney charge you $15,000 for some boilerplate special. You have specific needs, especially when you have a business partner. Make sure it addresses what you haven't thought
of — and trust me, you haven't thought of everything.

If your attorney is worth his/her salt, they've seen and put together hundreds of these. Their firm has likely litigated hundreds of partner disputes. Your accountant is also a valuable asset, as well as friends who've been around the block on business partnerships. Use all of them and incorporate all you learn into the operating agreement. Make sure the advisory board you seat has the ability to issue a binding resolution. Without this clause, as 50-50 partners, either partner can ignore any resolution issued.

Chalk this gem up to what you don't know. Here's an example: Let's assume Tony and Pete have entered into a 50-50 partnership. A few years down the road, Tony is heading to divorce court. After a year and a half of wrangling with his ex, things are finally wrapping up. Assets and debts have been assigned and final paperwork is all but signed. As part of the agreement, Tony's home has been listed with a broker, who held an open house and has a great offer in hand. The house is going to be sold — what a relief … not so fast.

Tony used that home as collateral for the business loan. Pete also used his home as collateral, but here's the rub: the equity in Tony's home is 75 percent, while Pete's equity is only 35 percent. The bank receives notification of a sale pending, but won't release the mortgage because it still needs the home as collateral.

According to the divorce agreement, Tony is due to receive 50 percent of the proceeds of the home. Unfortunately, the bank tells Tony even if he pledges the entire amount he receives from the sale, the loan is still under collateralized and it won't release the mortgage. This is a huge blow, since this represents startover capital for both Tony and his ex.

Tony approaches Pete and explains what has transpired. He tells Pete he has to pledge additional collateral — another 50k, which would then make them both equal "collateral partners." By doing this, it will enable the home sale to close and mortgage to be released.

Pete isn't too happy — it's tens of thousands of dollars he doesn't have laying around. But, he knows he has to comply for three reasons. First, had they known when they started the company, he would have had to pony up or risk being a minority owner. Second, it's the right thing to do. And third, he knows if he doesn't comply, there likely will be a second divorce — the business kind.

The simple truth is, this should have been on the radar much earlier. The partners should have disclosed financial statements before going into business. However, even if they had, this probably would have fallen into the "I don't know, what I don't know" category.

The loan officer should have been the first one to question this and should have brought it to the attention of both partners. Additionally, the operating agreement should have addressed this discrepency. A great reason these documents should be customized to your specific needs.

If you are going to have a partner, remember the Partnership Rules.