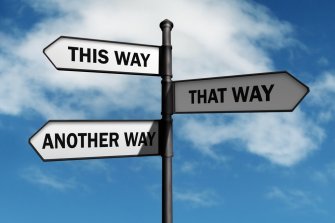 Common sense – it’s simply knowing the difference between right and wrong. It entails a personal and subjective process of analyzing a situation and finding a solution that works. For most people I think it’s their first instinct, the rational thing they would do without giving the situation a thought. Again, I said for most people.

The nightly news is filled with people that have lost all common sense or never had it to begin with.  Many appear to be in the category of “celebrity”. People in this group can’t get out of their own way and like to repeat their mistakes. Unfortunately, common sense and responsibility doesn’t come with the millions they seem to so easily earn.  To be sure, however, they don’t have an exclusive on being knuckleheads. Over my business career I’ve worked for both large and small companies, and have had the opportunity to observe individuals making business decisions that I was pretty sure were going to end up being horrendous mistakes (i.e., lots of money was going to be lost). Or, astronomically stupid mistakes (i.e., money evaporated and hundreds of people lost their jobs).

As business owners, when our common sense fails it’s a result of not trusting our gut instincts, not trusting our advisors input, making invalid assumptions based on fear, ego, or wishful thinking, or the holy grail – the decision maker failed to get relevant facts before a decision was made.

Here are some examples you can learn from:
In 1981 Amblin Productions called Mars and offered a simple cross-promotional opportunity: We’ll use M&Ms in our new film, giving you free publicity, and in return, we ask that you promote our film on your packaging. The advertising and marketing folks at Mars said “No.”  The film was E.T. the Extra-Terrestrial, and the rest is history.  Reeses Pieces, the lesser-known M&M’s competitor, saw sales jump 65% after the film was released featuring their product.

Eastman Kodak Company developed the first digital camera in 1975, then proceeded to sit on it (and the core technology for the cell phone, as well).  They decided not to develop it because they were afraid it would cannibalize their film business (at one point they had a 90% share of the U.S. film market). In the early 1980s, Fuji entered the U.S. film marketplace with lower-priced film and supplies, but Kodak management believed that U.S. consumers would never abandon their homegrown brand. In 1984, Kodak passed on the chance to be the official film of the 1984 Los Angeles Olympics. Fuji won the rights, which gave them the strong foothold they needed to catalyze their growth in the U.S. marketplace. Only when film’s popularity began to wane in the mid-1990s in favor of digital photography did Kodak push into the digital market — but it was too late. By 2001, Kodak was in second-place to Sony in the digital camera market, but it lost $60 on every camera sold. By 2011, the stock had dropped to 65 cents per share and the company filed for bankruptcy.

In 1977, the senior execs at 20th Century Fox made an astonishingly short-sighted decision. They signed over all product merchandising rights for any and all Star Wars films to George Lucas in exchange for a mere $20,000 cut in Lucas’s studio paycheck. The combined revenue from merchandising is estimated to have exceeded $3 billion, and continues to grow annually, making it the most lucrative deal ever struck between an individual and a corporate studio in entertainment history.

In 1876 William Orten was President of Western Union, which had a monopoly on the most advanced communications technology available, the telegraph. Orten was offered the patent on a new invention, the telephone, for $100,000 (worth about $2 million in current dollars). He considered the whole idea ridiculous, and wrote directly to Alexander Graham Bell, saying, “After careful consideration of your invention, while it is a very interesting novelty, we have come to the conclusion that it has no commercial possibilities”.  Two years later, after the telephone began to take off, Orten realized the magnitude of his mistake, and spent years (unsuccessfully) challenging Bell’s patents.

Firestone began manufacturing radial tires in 1972 to lengthen the life of its product. The company used a new technique to get its tires to market ahead of competitors. That year, after Firestone’s tire was in production, company documents reported that the rubber came off the wire when the tire was in use. Despite these problems, the company continued to manufacture the tires throughout the 1970s to satisfy demand from customers like General Motors. Pressure from the government and consumer advocacy groups concerned about the safety of the tires forced the company to recall 10 million tires in 1978. Initially, Firestone blamed the tire failure on substandard consumer maintenance. However, an investigation by the National Highway and Traffic Administration in 1980 found that Firestone was actually aware of the defective products, citing the 1972 company’s internal documents. This led to lawsuits and negative publicity, which hurt earnings and sales. The stock price plummeted.

In conclusion, common sense can help dictate your course of action. However, when in doubt, use all the other resources available to you.
Know your limitations and ask for advice. Don’t let your ego get in the way. All too often your ego will be your downfall.

Get your facts right. Your service techs don’t repair equipment without first performing diagnostics to identify the problem. In the same vein, don’t make business decisions until you have clearly identified the problem or opportunity. And always remember to read the fine print.
Don’t make assumptions — know whom you’re dealing with. In the digital age, there’s no justification for entering into a business deal, making a new hire, or taking on a new brand without first finding out key  details about the people and companies you do business with. Research new business partners and hires. Visit their websites and social media profiles, and make the most of the tools available to you.