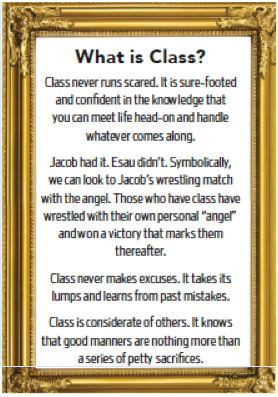 A Touch of Class

You are all familiar with Nike’s famous “Just Do It” ad campaign, launched with Bo Jackson. That campaign was about getting into shape: no excuses, just get up and “do it.” That promotion was — and is — brilliant on a number of different levels. Because of its simplicity, everyone can relate to it.

As a leader, you’re often faced with difficult decisions. Much like Nike’s campaign theme, you can choose to “just do it,” or you can opt to stay on the couch. Leaders who have established a set of criteria to lead by, manage by and live by are often able to make those tough decisions more quickly and easily. As those criteria are practiced, shared and exercised, they become part of a company culture. And that’s what this series is really all about: helping you establish leadership guidelines and decision-making criteria.

I doubt any of the infamous executives who have been in the news over the past ten years like Ken Lay, Enron; Dennis Kozlowski, Tyco; Jon Corzine, MF Global; Bernie Ebbers, Worldcom and Bernie Madoff, Maddoff Investment Securities had a set of rock-solid guidelines they managed by. If they had, they wouldn’t have made the mistakes that landed them in the news for all the wrong reasons.

If only they had considered one of the gems from Thomas Jefferson’s A Philosophy of Life: ....and never suppose that in any possible situation, or under any circumstances, it is best for you to do a dishonorable thing. Whenever you are to do a thing, though it can never be known but to yourself, ask yourself how you would act were all the world looking at you, and act accordingly. Had they followed Jefferson’s philosophy, their futures, as well as the futures of their employees and their companies, would have been much different.

Just like The Man in The Mirror and Thomas Jefferson’s A Philosophy of Life, What is Class offers a set of principles; a way of thinking, acting and doing that will set you apart from others and establish you as a leader people will want to follow. Share these ideas, thoughts and philosophies with others. Ingrain them in all you do. It won’t be easy, and it will take time, but, like all great challenges, the journey is often more exciting than the destination.

Class never runs scared. It is sure-footed and confident
in the knowledge that you can meet life head-on
and handle whatever comes along.

Jacob had it. Esau didn’t.
Symbolically, we can look to Jacob’s wrestling match
with the angel. Those who have class have wrestled
with their own personal “angel”  and won a victory
that marks them thereafter.

Class never makes excuses. It takes its lumps
and learns from past mistakes.

Class is considerate of others.
It knows that good manners are nothing more
than a series of petty sacrifices.

Class bespeaks an aristocracy
that has nothing to do with ancestors or money.
The most affluent blueblood can be totally without class
while the descendants of a Welsh miner
may ooze class from every pore.

Class never tries to build itself up
by tearing others down.
Class is already up and need not strive
to look better by making others look worse.

If you have class, you don’t need much of anything else.
If you don’t have it, no matter what else you have,
it doesn’t make much difference.

From Howard Ferguson’s book The Edge