Businesses are more focused than ever on building online communities of customers. They are increasing Facebook-page “likes” and developing followers on Twitter in response to consumers’ increasing use of computers and mobile devices for making buying decisions.

This rise in Internet-enabled connectivity has a downside, though. In a world where everyone is instantly accessible by cell phone, email, and text message, it can be challenging for business leaders and their team members to find time in their crammed schedules for person-to-person customer relationships. But commercial and residential HVACR contractors need to make time for one-on-one interaction because when face time is a purposeful part of your overall marketing and sales efforts, the business rewards can be much greater than the effort.

The results underline the importance of really reaching out and connecting on a personal — as well as a professional level — with customers.

“People buy from people. They don’t buy from the machines,” says Al Kuhnemann, sales manager for Brady Services, a company that provides high-efficiency HVAC systems and comprehensive building solutions for commercial and industrial facilities across North Carolina. All technology provides is tools to support your relationships, he adds.

To make this point to his sales staff, Kuhnemann uses this exercise: For a week he has them track what they’re doing so they can see where they spend their time. He says this shows them that it takes dedicated effort to maintain one-on-one personal relationships with customers

“It’s striking then for them to see how much time they’re not spending with the customer … if you don’t know you’re not getting there, you don’t really feel a compulsion to figure out a way to get there,” he says.

Entering the customer’s world and getting involved allows you to do a better job for them, he says. Some of the ways the company fosters that involvement is by instilling a culture in which everyone is in sales. Everyone from top to bottom — whether they’re a technician, in finance or marketing—they’re all in sales, Kuhnemann says.

“The technicians are out there interacting with the customer, doing the job day in and day out, providing a solution — they’re selling for us too,” he says.

A lunch-and-learn is simply an informal meeting for shared thoughts on specific topics of mutual interest, Kuhnemann says. For example, if a customer mentions that they wonder what the latest is with regard to legislation on refrigerants, what the EPA is doing and how it will impact engineers, or that they'd like to learn more about energy management systems, the Brady team will research, collect data and then all interested parties will sit down together and share in a discussion. Occasionally it may be generated by a problem on a job after which the team sits down to educate themselves on how to prevent the same problem from occurring on a future job.

Wherever the lunch-and-learn takes place, multiple associates are involved.

The company also will invite customers to join them at baseball games.

“We invite them and their families, and we’ll have our people with our families, so there’s a business and a social side,” Kuhnemann says. “. . . part of it is the profit — the take-home disposable income to take care of your family. But there’s also an ingredient in it spelled F-U-N, and as you get more impersonal, you have less of that.”

Though he doesn’t know how you quantify it, he says, “After 42 years worth of this, the sustainable relationships and partnerships are an outgrowth of this personal interaction.”

“What I always teach to our territory managers, or our outside salespeople, is to build relationships. So that’s not to say that email and Twitter and all that is not important, but I would say the foundation is the face-to-face relationship.”

Grant encourages his sales team to interact with customers by providing a sales call sheet on which he provides tips on talking points. The sales team uses that sheet to record with whom they’ve talked about each topic as a way to track their interactions.

It’s easier to communicate with people via the other vehicles once you’ve already developed a relationship, Grant says. “It’s easy to take an email wrong. But if you’ve already met the person and they already know your style, then that doesn’t become as much of an issue.”

Kuhnemann adds to that his personal rule that problems are solved face-to-face.

So, overall, being in front of the customer naturally makes us better business partners, Kuhnemann says.

“We don’t want to be a supplier. We want to try to be a business partner, and the way you do that is you’re in their world a little more, and you’re not just selling widgets.”

Get Involved To Be Remembered

Getting involved in the customer’s world helps you to build trusting relationships, and that is what keeps customers coming back, says Emy Tice, general manager for Boyer Heating and Cooling in Flagstaff, AZ.

“You do business with the people you know and like,” Tice says.

The way Boyer has instilled that philosophy is through participating in business-referral groups and through community involvement. The company has donated to non-profits and school programs and has provided complete systems for Habitat for Humanity homes and flood victims. Employees are also encouraged to join organizations throughout the community that match their personal passions.

Sometimes businesses won’t be able to donate as much as they would like, says Brian Boyer, vice president and co-owner of Boyer Heating and Cooling. With the economy down, it’s understandable when businesses have to cut back. However, Boyer and Tice stress that during such times, giving of your time is just as appreciated.

Community involvement isn’t a business strategy that one would market, Tice says.

“If you live by the rule of give without expectations, then it’s something that you don’t need to market. You do it because you think it’s important.”

However, the reward is in the relationships you build with members of your community who may become customers at some point, or are willing to refer friends and family to your company because they know the business is trustworthy.

It all comes down to just spending time with your customers as people. Grant relates how one of his younger salesmen spent five hours on a Saturday brewing beer with one of his seasoned customers. “You can’t replace that with anything,” Grant says.

Similarly, Kuhnemann says, “When you see your grandsons fishing on the pond with the customer’s grandkids, you sort of know it’s a relationship.”

And developing and sustaining relationships is key to everyone’s success.

“We Tweet and email, comment and like one another, but when it's time to get down to business, it's time to talk,” says Chris Westfall, an MBA instructor at the Business Leadership Center at SMU Cox and a professional development coach for Texas Christian University. “Social media is only a tool and cannot replace the face-to-face communication that's needed for your customers. The key is developing an elevator pitch that's relevant and compelling — the kind of 30-to-60 second speech that inspires action,” he adds.

The market is competitive, and time in front of customers and potential customers has to be used wisely. You have to make an impact with your value proposition; sometimes fast. This takes practice.

According to Al Kuhnemann, sales manager for Brady Services in North Carolina, practicing that face-to-face opportunity is key. He has begun incorporating role-playing to help his sales team develop elevator speeches for both planned and random encounters. For example, he says, a salesman is sitting next to a company owner on an airplane and the owner says, I’m having a little trouble with my HVAC; what would you recommend?

The plane has landed. You have maybe 15 minutes. What do you say?

"The best elevator pitches make the listener say, ‘Tell me more’,” Westfall says. “People are bombarded with millions of messages everyday, and they need a reason to listen to your story.”

You need to be compelling, and the way to do that is by focusing your message on your customer’s needs and how you can help meet those needs, Westfall adds.

“You have a team, you have trucks, you have energy efficient products, but what are you going to do for your customer? Think about the ‘so what.’,” he says.

Consider the value of quality and a job done right.

“How can you help people to save money and feel good about the way they are using energy today? Start with that message, and see where your elevator takes you."

Heather Onorati is former editor of HVACR Business and now works as a writer and editor in business communications.

YouTube may conjure images of finger-biting babies, flash mobs, and “Gangnam Style” parodies. But the truth is, YouTube is an engaging and economical marketing outlet that HVACR businesses should not …

Rebuild Your Brand in Three Steps

One of the most powerful tools to help overcome a prospect's natural skepticism and to build relationships is the customer testimonial. They create believability, credibility, and a sense of security …

The world is going green. No matter where we’re tuned in, we’re bombarded with messages on eco-friendly business solutions, clothing, toys, housewares, vacation spots; you name it. Everything references “going … 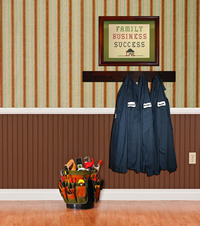 Contractors who work with relatives need to maintain healthy operations and relationships.

How a cloud-computing model can save money, increase capability, and relieve IT headaches for HVACR contractors.