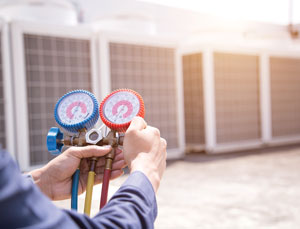 Learn more about the state of refrigerants in the HVACR world.

Refrigerant transitions are happening now, and these transitions will have a big impact on both equipment manufacturers and contractors.

The transition became reality when EPA, through their Significant New Alternatives Program (SNAP), banned manufacturers from selling many types of HFC refrigeration systems. Refrigerants like 404A and 134a, which have high Global Warming Potentials (GWPs), were suddenly illegal in some new equipment.

You may have heard that the regulatory push for new refrigerants has, for now, slowed down. Contractors can be misled by this temporary pause in federal regulations. If you slow down your preparation to install and service these new systems, you could be playing catchup later — trying to catch up to your competition!

The hiccup here was that, after litigation, EPA was told that it lacked the authority to tell manufacturers that had already moved from HCFCs to HFCs (that is, all of them!) that they now had to move away from HFCs. However, although EPA had to withdraw its rules, the die had been cast and most refrigeration equipment manufacturers have already moved on and are almost exclusively offering low-GWP options. EPA is re-writing those regulations and likely later in 2019 we will see how they have changed.

Meanwhile, the regulatory action has moved to the states. After President Trump announced that the US would withdraw from the Paris Climate Agreement (which, ironically, takes effect the day after Election Day 2020), several states announced that ‘we are still in’ and that they would be controlling greenhouse gas emissions on a state level. As of this writing, that group includes 22 states, representing over 50 percent of the US population. The list is growing by the month, so it is likely that some of your customers are in areas that will have their own statewide refrigerant phasedown rules.

California, as is usual with environmental regulations, is the furthest advanced, with several other states being just in the early stages of developing their regulations. In California, the former EPA SNAP rules on commercial refrigeration are currently in effect and restrictions on high-GWP refrigerants for air-conditioning systems are being drafted. HVACR equipment manufacturers are asking those states to work together for consistent regulations, but it is likely that the regulations would not all be identical.

In the future, the industry will be dealing with different types of refrigerants than in the past. Most of the refrigerants that have lower global warming properties are also flammable, although some just slightly so. Others, such as propane (R-290), can be quite flammable. The chart below, taken from an ASHRAE standard, shows how refrigerants can be classified as toxic (B) or non-toxic (A) and non-flammable (1), lower flammability (2 and 2L) and higher flammability (3). 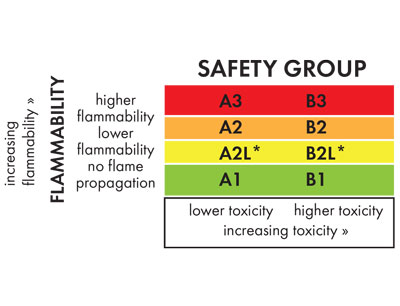 So, for example, R-410A, which is non-toxic and non-flammable, is classified as A1, whereas R-32 is an A2L, since it has very low flammability. Type 2L refrigerants have sometimes been described as easy to ignite, but hard to keep ignited.

refrigerants that are flammable or toxic, safety is of the utmost concern.

There is a lot to consider; designers, installers and owners need to balance the safety and sustainability, the desired system performance, costs and the refrigerant properties. 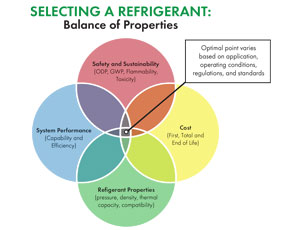 The optimal point for design will also vary based on several factors such as the application, operating temperatures, regulations and standards. The various operating conditions will change based on regional use or on design use such as air conditioning, refrigeration or freezing. Another consideration is whether the system will be in occupied spaces or more isolated, such as a machine room. 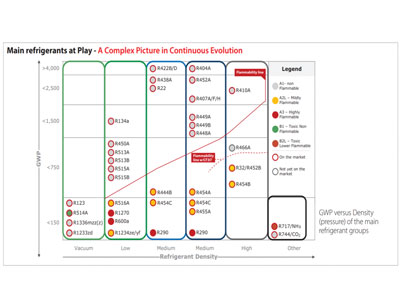 Today we can already see rapid adoption of some of the lowest GWP refrigerants including the use of R-290 for smaller self-contained equipment. The condensing unit and split system market is not as clear cut. There has been a transition to R-407A/F and some locations are starting to work with R-448/R-449A and concerns remain prior to moving to flammable refrigerants for larger charge split systems. We can also see transitions in supermarkets to CO2 and some trials with R290 with semi-plug ins.

Globally there is wider adoption of CO2 as there are over 10,000 systems installed in supermarkets that are operating safely at higher trans-critical pressures.

Which refrigerants are being considered for air-conditioning applications? Sub-categories of air conditioning are unitary, commercial rooftops and commercial chillers which typically use scroll compressors with high density R-410A. Larger capacity commercial chillers using dynamic compressors such as screw or centrifugal use low density refrigerants such as R-134a, R-513a or R-123. As you can see from the chart, the primary refrigerants being evaluated as a replacement for R-410A are R-32, R-452B and R-454B.

Each refrigerant has some positive and negative effects on the system. This chart shows a side-by-side comparison of some of the design properties for R-410A and lower GWP substitutes.

Aside from evaluating the refrigerant for flammability and toxicity classification, the refrigerant must be evaluated holistically as applied to an application to ensure proper system performance and reliability.

A significant amount of work is necessary to design and qualify both equipment and subcomponents that will use the newer refrigerants.

Pressure is one refrigerant characteristic that has been evaluated. For many years systems were designed for use with R-22 and or R-404A with a maximum working pressure of 500 psi.

To achieve a safe working system, equipment must withstand three to five times that maximum working pressure. In the 1990s, designers had to overcome the hurdle of increasing the working pressure to 650 psi to accommodate the higher working pressures of R-410A. More recently, in the last decade designers have been working to build safe systems for the wider adoption of CO2, which, when operating in the transcritical region, can operate at pressures upwards of 1800 psi.

Compression technology is a major consideration for refrigerant selection. It can take a year or more of development work to qualify a known compressor technology for a new refrigerant. The refrigerant properties will greatly dictate which compressors can be paired with specific refrigerants.

Compression and volume ratio, discharge temperatures and bearing loads are just some of the compressor design considerations. In air-conditioning applications, many scroll compressors are used with R-410A. To evaluate a lower GWP refrigerant, such as R-32, a complete change in design is necessary.

The high discharge temperatures might require the addition of liquid or vapor injection to keep the temperature within an acceptable level. R-32 has a higher density than that of R-410A, which allows a designer to reduce the piping sizes and charge to keep acceptable velocities.

Along with the compressor selection, an evaluation on the compatibility with the type of oil is required. Compressors are designed with minimum oil circulation rates to prevent too much oil from being pumped out into the system. High OCR rates reduce overall system performance by coating the heat exchangers and reducing capacity.

Understanding the refrigerant density and pressure is critical to properly sizing pipe diameter. This is a critical aspect of system design with new refrigerants, as we can see a much higher percentage of failed compressors in systems where a refrigerant field retrofit has taken place due to lack of oil return and low suction velocities.

Heat exchangers need to be evaluated based on the operating pressures, the density of refrigerant at operating conditions, the thermal capacity and if the refrigerant is zeotropic and has glide. If the refrigerant is flammable, such as R-290, considerations are made to reduce the internal volume as much as possible to meet charge restrictions.

If a new refrigerant is slightly flammable, the O-rings must be compatible to ensure there are no leaks or a product needs to be redesigned to eliminate the seals.

How Should Contractors Prepare?

Considering all these changes, what’s an HVACR contractor to do? Big changes are looming ahead, but there is a temporary lull in federal regulations. Nevertheless, there are several reasons to start executing a plan.

First, several states are developing their own phaseout plans — and more states are likely to do so soon. Second, manufacturers are moving ahead with design and development of equipment with higher efficiency and new refrigerants.

As Yogi might have said, “The future ain’t what it used to be!”