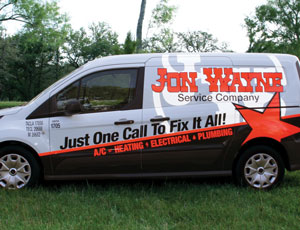 As the entries pour in for the Tops in Trucks Fleet Design Contest, a handful of contractors submit their trucks year after year. Sometimes they enter again because they’ve tweaked their design or rebranded or simply because their proud of their trucks and want to be considered by the judges again.

Never before, however, has a winner of the Tops in Trucks Fleet Design Contest entered the very next year — with an entirely new design. That is, until we received an entry this year from 2016 winner Jon Wayne Service Company.

“Courage is being scared to death but saddling up anyway.”

As Jon Wayne began the process of updating its overall identity, just as it did with its previous trucks, the company created the design in-house.

“The update covered everything from our logo to our office paperwork, so the trucks were another facet of that process,” Rackler says. “We chose our colors to be bold and stand out from the competition in our area. They have served us well for many years now.”

Rackler says they didn’t want to change the design too much, because it was important for it to still be a recognizable John Wayne truck.

“Sometimes it isn’t being fast that counts, or even accurate; but willing.”

The design stemmed from Jon Wayne’s desire for its trucks to leave a lasting impression.

“We simplified the amount of information contained on the trucks and really focused on our name, logo and trades,” Rackler says. “We even removed our website and minimized our phone number, as we found that most customers were simply Googling our name before contacting us.”

Instead of going with a full wrap, Jon Wayne’s fleet graphics are made of cut, 3M graphic materials. Rackler has found that the longevity of the 3M materials is a big advantage, and it works well with his philosophy of less is more.

“In my opinion, a lot of wrapped trucks are too cluttered and you can’t really even tell what message they’re trying to get across until you get up close,” he says.

Wraps have a typical lifespan of three to five years before they fade out and peel off, Rackler says. The 3M graphics are easy to replace if they get damaged.

“It looks like it’s going to be another fine day.” 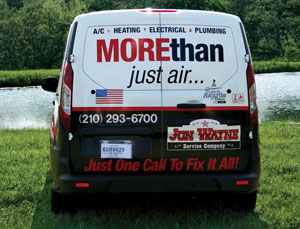 Vehicle recognition remains one of the top responses from Jon Wayne’s customers during its information gathering process.

“Just the internal stimulation we’ve received from our employee’s getting new vehicles to drive is a major return on investment,” Rackler says. “They serve the customer every day and this helps make that service even better.”

The fleet definitely speaks for itself. It remains a strongly branded Jon Wayne Service Company vehicle, while still portraying a new fresh look.

“My dad taught me a long time ago, ‘All Business is Show Business,’” Rackler says. “This fleet of trucks means business.”

Employees love the new vehicles and refreshed design. They elicit a high sense of pride when driving by the competition on the road or pulling up to the customer’s home.

“Hurry it up. We’re burning daylight.”

One of the more interesting elements of the new truck design is the huge JW brand circle watermark, which is done in 3M reflective tape.

“We use that material on some other things and thought, ‘Hey let’s see what it looks like on here,” Rackler says. “I couldn’t be happier with the result … that reflective watermark really pops like neon at night.”

“We built a sound and stable business by always trying to do the right thing and keeping our customers’ best interest at heart,” Rackler says.