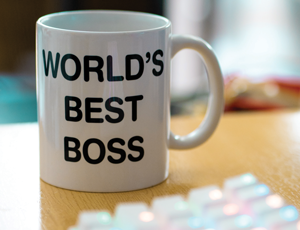 Advice from the World's Best Boss

Netflix is great. Not only is it full of original series and movies, it’s also home to some of your old favorites. Movies you haven’t seen in a while, or maybe television shows you either haven’t seen or simply want to watch again — it’s all there at your fingertips either on your television, your computer, your tablet or even your phone.

What I find so convenient about Netflix is the ability to watch something on your own schedule. Lately, I’ve been re-watching the U.S. version of The Office. I’d watched the first few seasons back when it was on television a decade ago, but as I got busier I had less time for TV and never watched the entire series.

I started at the beginning about a month ago, but with nine full seasons, I imagine it will take me a while to get through the whole series. That’s okay. I’m not really in a hurry.

Although its a comedy, much of it is based on reality. Having worked in several offices over the years, I can attest that many of the hijinks from the show do in fact happen in real life. What’s interesting, however, is just how much actual, solid business advice I’ve been able to pull from the show if I look below the comedic surface. Michael Scott, played by Steve Carrell, is the narcissistic boss who tries way too hard to be funny and liked by everyone.

Most of the time, what he says may not make the most sense. It’s a television show after all, and it’s meant to be funny. But at its root, you can find a business lessson worth listening to. Whether you’re a fan of the show or not, whether you’ve seen it or not, I think you can appreciate some of the wisdom Michael Scott has to offer your business.

It’s a silly way to put it, but how many times have you been the first one in the office and the last to leave? As the boss, your employees follow your example.

You may have earned the right to show up late, leave early and come and go as you please throughout the day, but what kind of message does that send? If you’re not willing to work hard, neither will your team.

“Do I want to be feared or loved? That’s a good question. I want both. I WANT people to be afraid of how much they love me!”

Throughout the series it’s quite evident that as a boss — and a person — all Michael Scott wants is to be liked. His actions, while often ill-advised and inappropriate, all point to achieving this simple goal.

“The people that you work with are, when you get down to it, your very best friends.”

Micheal truly thinks of his employees as his family. They are the most important people in the world to him.

“In the end, life and business are about human connections.”

Whenever Michael talks to a customer or potential customer, he doesn’t just spout facts and figures about the company. Instead, he makes a connection with that customer and demonstrates the personal service and family atmosphere of his company.

The lesson here is quite simple. Forget about the numbers sometimes and remember what is truly important: the people. Your family, your employees, your customers ... making meaningful connections and improving the lives of the these people is what it’s all about.