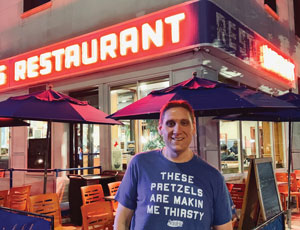 Build Your Team, Know Your Limitations

Last month marked the 30th anniversary of the first episode of “Seinfeld,” which aired on July 5, 1989. Anyone who knows me (or has read my columns regularly) knows that I’m a huge fan of the “show about nothing.”

On a recent trip to New York City, I made my wife go with me on an out-of-the-way side trip to the Upper West Side of Manhattan just so I could take a picture in front of Tom’s Restaurant, which doubled as the exterior shot of “Monk’s Café” on the show.

Although there hasn’t been a new episode of “Seinfeld” in 21 years, the show lives on in syndication and not a day goes by when I cannot relate some aspect of life to something that happened during it’s nine seasons.

Case in point: I recently watched the classic episode “The Alternate Side,” and immediately thought of a valuable life lesson.

The main plot of that episode involves George Costanza parking cars. As the show opens, we find out Jerry’s car has been stolen. Turns out Sid, who makes a living moving cars in the neighborhood from one side of the street to the other throughout the day so residents don’t get tickets, accidentally left Jerry’s keys in the car.

As Sid is apologizing, he informs Jerry that he’s going to visit his sister for a week and won’t be able to park cars. Upon hearing this, George asks if he can fill in while he’s away.

“What’s a young man like you want to move cars for? You don’t work?” Sid asks.

A couple of scenes later, we see a frantic George, with multiple sets of keys latched onto his belt, rush into Jerry’s apartment. He’s clearly overwhelmed by the seemingly simple task of parking cars.

A little while later, an ambulance is delayed because the entire intersection is gridlocked, thanks in large part to George’s parking fiasco. In fact, as the ambulance was finally able to turn the corner, they slammed into George, who happened to be driving Jerry’s rental car at the time.

When Sid returns from vacation, he has more than a few stern words for George.

“Now you didn’t tell me you didn’t know how to drive. You should have mentioned that,” he says.

When George tries to explain that he does in fact know how to drive, Sid is quick to reply, “Then how’d all those cars get damaged? Why are people calling me up screaming on the phone? Most of them cancelled out on me.”

Now, for the lesson. Actually, there’s two we can glean from this comical scenario.

The first is this: As a business owner, everything falls on your shoulders. It’s important, however, to make sure you build a competent, trustworthy team around you.

When the time comes that you have to leave town, whether for a vacation or business trip to one of the many shows and conferences in this industry, you want to be sure you have people in place so that your business doesn’t suffer in your absence.

Had Sid properly prepared George before he left, he might not have lost so many customers while he was away.

It’s easy to always say yes and take on more and more work in the interest of growing your business, but sometimes you have to say “no.” If you don’t have a proper growth plan in place, you may quickly become overwhelmed with the extra work and your business will actually suffer instead of grow.

George, obviously, didn’t know his limitations and was quickly in over his head when he agreed to take on Sid’s job. He didn’t have a plan, instead jumping in head first to what he thought was easy money.

Growth for the sake of growth isn’t always a good thing, especially if profits suffer because you’ve gotten too big.

One interesting side note: This episode coined the catchphrase, “These pretzels are making me thirsty.”